Examples Why Nose Threads Are Better Than Hyaluronic Acid Fillers 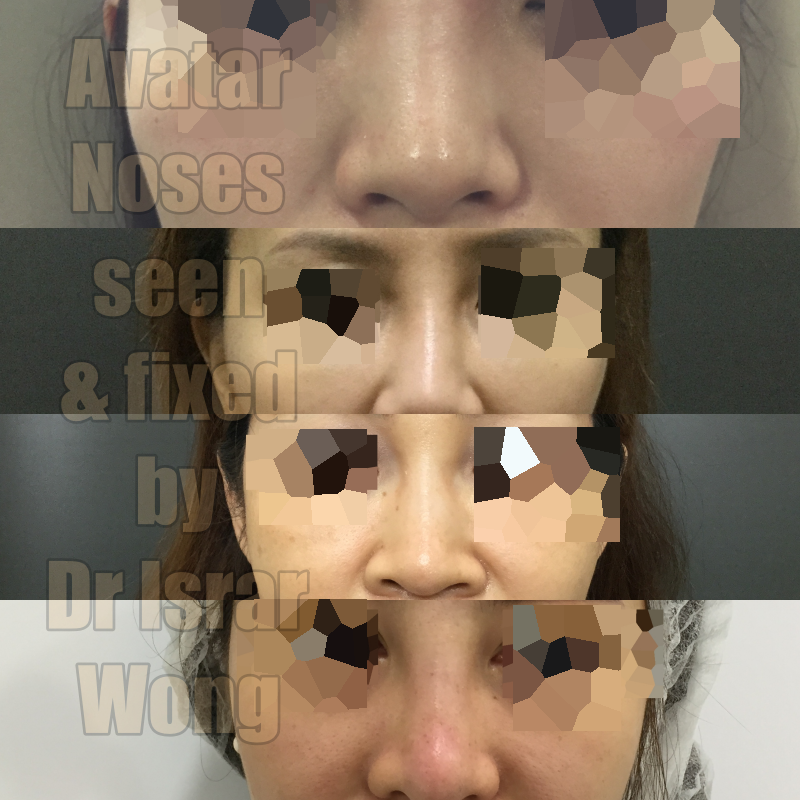 Why are Nose Threads the treatment of choice for nose augmentation ( non-surgical nosejob)?

The various reasons for nose threadlifts to replace nose fillers have been discussed before. Please read here.

In summary, it’s because of:

The title pic above are examples of non-surgical nose augmentation (nose fillers) performed with hyaluronic acid fillers that I have encountered in my years of practice ( they happened to be mostly from a certain brand which I can’t reveal here). In fact, these doctors’ unhappy patients are a constant source of new patient leads into my practice, and as an economic standpoint – I should be keeping quiet about this. However, it is also very important to improve the standard of aesthetic medicine so as to do good to patients worldwide.

How do we prevent an “Avatar” nose?

It is highly displeasing for the patients to see their nose bridges widened after treatment. After all, they wanted a good aesthetic result after paying for the nose fillers. How do we prevent it from happening to you?

Firstly, request for nose threads to augment your nose. Read here to find out why in detail. Nose threads are physical medical polymers which strut up the nose and can be dissolved by your skin over time.

Secondly, if you understand the risks and still want fillers only, choose non-hyaluronic acid fillers like Radiesse or Ellanse (please do not choose Sculptra even though it’s also a collagen-stimulator) for the nose bridge. These fillers are collagen-stimulating fillers and they have extremely high viscosity and lifting strength, thus they do not migrate or spread from the location where they were injected in. Much smaller amounts are needed as compared to hyaluronic acid as well, thus saving costs.

What should I do if I already have an “Avatar” nose?

I would advise highly to dissolve the fillers with hyalase (hyaluronidase), an enzyme which turns hyaluronic acid into water. After 5-7 days later, to insert nose threads.

Below are examples of my patients whom I have helped to remove their migrated fillers and reshaped with nose threadlift.

Left(Before): Note the spreading of the fillers into the area between the eyebrows and is spreading towards the inner eye corners. The central bridge is also “fat-looking” as a result.

Right(After): The fillers were hyalased and nose threads inserted to reshape the whole nose. The end result is a slimmer, more elegant and defined nose.

Left(Before): The central bridge is “fat-looking” due to 2cc of hyaluronic acid being injected over a period of one year.

Right(After): The fillers were hyalased and nose threads inserted to reshape the whole nose. The end result is a slimmer, more elegant and defined nose. Tear Trough fillers were also done as well to refresh the under eyes.

But what if my aesthetic doctor says it looks ok?

This “avatar” nose epidemic is becoming more widespread due to certain doctors not following manufacturers’ recommendations not to use their fillers on the nose. Especially those who stock only a certain brand and they are forced to buy large volumes of those fillers on a contract, thus they just use a “one-size fits all” approach and use those fillers for nose augmentation even though there are way better options.

Also, some of these patients DO NOT EVEN notice that they are having such unsightly results from their nose fillers. I had to point out to them because their previous doctor wouldn’t tell them the truth (or maybe they didn’t notice as well?).

Next, some of these patients who did notice something was amiss, went back to consult the injecting doctor and he/she insisted that it’s normal and ok, and that it will dissolve away by itself. However, if the fillers migrate to the sides of the nose bridge and glabellar region, there are not much natural hyaluronidase in the skin there to dissolve away the fillers! Therefore, the fillers may stay for an extended period of time. Normally, this is good for the patient, but in this case, it exacerbates the situation. Tell your doctor it’s NOT OK to have an “avatar” nose!

Choose your aesthetic doctor wisely as he/she should be able to appreciate the importance of a slim elegant and defined nose in Asian ladies/men.

NEVER BE SATISFIED WITH AN “AVATAR” NOSE! IT’S NOT OK!

I hope this post has helped you know more about recent advances in non-surgical nosejob / nose augmentation and warned you of the common pitfalls involved.