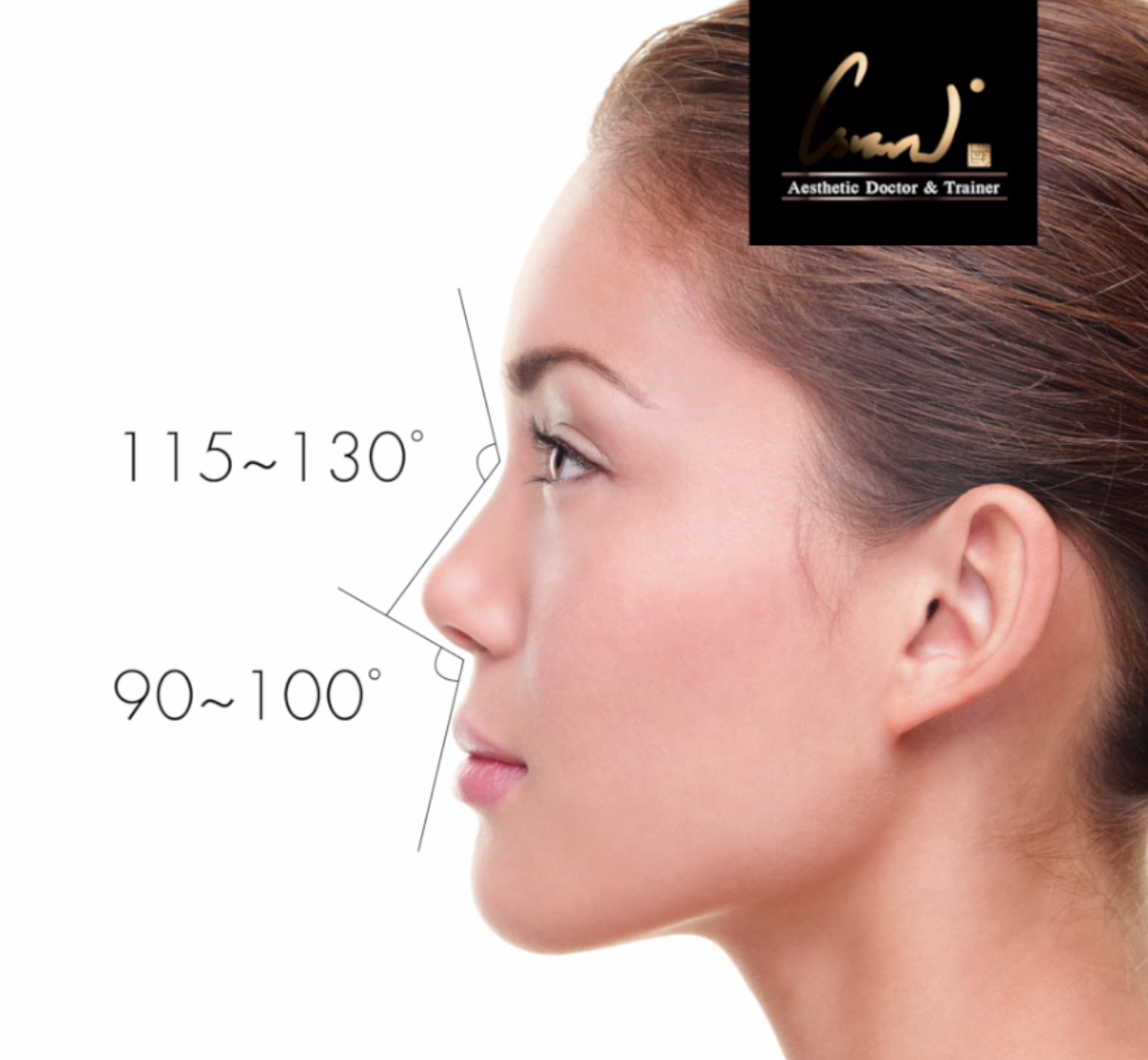 Ideal angles to create while augmenting the nose

The nose is often the weakest link of many Asians – lacking in height, poor in definition and projection combined with rather unsightly nostril sizes.

That is also why a good cosmetic doctor/surgeon TREATING ASIANS must be well-versed with the design, shaping and augmentation of our weakest links.

If the doctor’s patients are mostly Caucasian, then they must be skilled with the opposite technique – to reduce the projection and height of the usually very prominent Caucasian nose. There are major differences in facial anatomy structure and therefore, it is important to choose the right doctor for your nose enhancement.

Our weakest link – the nose

In fact, the above point about our Asian noses being weak links is very obvious – young ladies in Korea get either a nose-job or boob-job for their 18th birthday as a birthday present from their parents. THEIR PARENTS!

Young Asian adults usually augment their noses first along with upper blepharoplasty (double eyelid surgery). Augmenting the nose is a very delicate and artistic affair – there are certain angles to follow as shown below :

Risks of Overseas Nosejobs (as seen in my daily practice)

For those who don’t mind undergoing rhinoplasty surgery, the downtime takes around 2-3 weeks and the swelling can persist up to a month. Besides that, there is also the risk of getting a new permanent nose that one doesn’t like, or that doesn’t suit one’s face (happens in some patients I met who had their nose-jobs in Korea and Bangkok). There is also a higher risk of implant infection.

It happens due to various factors: language barriers between surgeon and patients (especially common in Seoul), insensitivity of the overseas surgeon to local aesthetic differences (Seoul too), or just pure indifference in thinking that there’s “ONE NOSE TO RULE THEM ALL”(definitely SEOUL). Even with an interpreter, little language nuances can be misconstrued and would you let your whole life be ruined by a second of miscommunication? Revision surgeries are very costly and cause even more downtime than first-time augmentations.

For those who prefer not to undergo nose augmentation surgery at all costs, previously, the number one treatment would be Nasal Fillers, with Hyaluronic Acid (Juvederm, Restylane etc) or Calcium Hydroxyapatite (Radiesse).

However, that has changed in the last 2 years with the introduction of Nose Threadlifts. Bio-resorbable threads which were previously used for lifting up the saggy tissues of the face were refined and a shorter version of the threads was developed, that could mimic or even better all the augmentation fillers could do, BUT WITHOUT THE VERY RARE RISK THAT CAME WITH NASAL FILLERS – BLINDNESS.

There are 2 arteries running beside the nasal bridge known as the Angular Arteries. Blindness from nose fillers results when large balls of fillers are accidentally injected into these arteries and are pushed into the connecting arteries that supply the retina and eyeballs, clogging up the retinal and ophthalmic arteries, causing partial to full blindness. There are many cases reported all over the world already.

Skin necrosis (lack of blood flow to the skin resulting in skin compromise and possible death) can also result if too much volume of fillers is placed at the glabellar or nose tip region, usually more common in over-zealous doctors (and/or patients).

Hyaluronic Acid fillers of the wrong type used for nasal augmentation can actually worsen the look of the nose. They can slide sideways off the central bridge and cause widening and poor definition of the nasal bridge, looking like the wide-nosed characters in Avatar, the movie. There is a certain infamous brand and type that always causes Avatar noses, of which I have seen countless times in different patients who come to me for help, from other clinics. They are usually surprised and shocked that I can call out the brand and the type of filler their doctors used.

For those who don’t want to do anything, a good make-up artist is also sufficient for events – as seen in the below picture.

What is a Nose Threadlift?

Simply put, a nose threadlift is a nasal augmentation procedure, in which we insert short 3.8-5cm or 5-7cm threads and place them on the nasal bridge or into the columnella, to shape the exact nose shape, height and definition that we want.

The full result comes from the “stacking” effect of many threads. It is just like a surgical nosejob, except that the “implants” are dissolvable within 1-2 years. It is fast ( takes just 15mins) and has no blindness or necrosis risks of fillers.

How is a nose threadlift performed?

For more details, check out the video below:

Possible Side Effects of Nose Threadlifts

The possible side-effects are similar to lifting threads :

Nose threadlifts have overtaken nasal fillers as the procedure of choice for non-surgical nosejobs.

The insertion of threads, in the right hands, is safe and can produce a result  just like that of nasal implants (when many threads are stacked together until its as thick as an implant).

Nasal fillers are NOT NEEDED when performing nose threadlifts to create the most ideal result( if he insists, it is probably he/she isn’t confident of his nose threads results, thus trying to buy some insurance by adding fillers).

Take Note : Please inform the doctor / surgeon what sort of a result you are looking for ( dramatic implant-like result or a natural looking result, and its best to show a picture of a celebrity’s nose you fancy – a great cosmetic doctor/surgeon will have good communication before nasal augmentation).